Over the past decade or two, the stigma around tattoos has gone from taboo to becoming mainstream. What some people do not know is that during the daytime, I am a manager in the Corporate World who clearly does not fit into that traditional mold. Working for the same company for over 15 years, it has allowed me to see first hand how the stereotypes have slowly started evolving and what it means to be different in this very traditional environment .

The stereotypes of what people “should” look like working in the Corporate World.

When I began working for my employer in 2002, I was a 20 year old College student that had a couple small tattoos and wore fitted clothing (aka booty pants & slinky tops). Looking back now, I seriously cringe at the thought of my younger self but it was a stepping stone to developing my confidence and discovering how to refine my own personal style. At that time, it was necessary to cover your tattoos if they were larger (aka not a little ankle tattoo) or have them in places that didn’t attract any attention. I remember asking my manager what the Corporate policy was on tattoos and they just said it was frowned upon so make sure to not cause any attention to the matter. 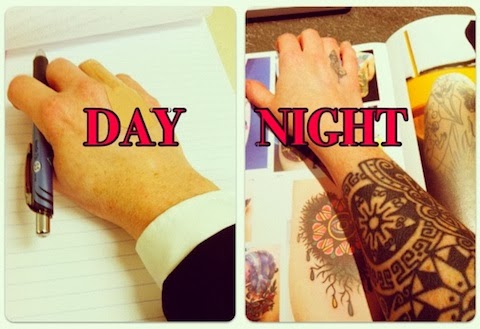 Many people are forced to live two lives: work vs their true selves.

As the years progressed I slowly started collecting more tattoos, always making sure they were placed in areas that could easily be covered in the workplace. By 2008, I had 6 tattoos that were all still considered small in size but my fascination with the artistry had evolved into a passion. I quickly became immersed into learning more about the different tattooing styles and artists. My love of the art really became a part of who I was but how could I start using my body as a canvas knowing my professional career was taking off? The last thing I wanted was to hinder my opportunities due to the old fashioned stigmas that still existed in the Corporate World.

Tattoos from my earlier years.

In 2010, I met my wonderful husband who admittedly had a thing for women with a tattooed arm sleeve. We both admired the beautiful artwork on other women but I knew it was out of the question for me because of the workplace. This was around the time that I decided I wanted my body to become a canvas to showcase my interests and passions in life. In 2012, when the opportunity of a lifetime of being tattooed by one of the best artists in the industry, we jumped on a train to Chicago to meet Hannah Aitchison for my 30th birthday. The plan was to get a tattoo of a beautiful pinup on my back to commemorate my lifestyle of all things pinup. Apparently Hannah had BIG plans, she had designed a piece that would cover my entire back. It was in that moment that I made a decision that changed my life forever and needless to say, I struggled with a lot of self doubt and feeling of regret in the weeks that followed.

When I returned home, I now had to tell my parents who are very traditional about this massive tattoo and more importantly, my boss. They all knew about why we were going to Chicago so it wasn’t like I could hide it for very long. The moment my boss excitedly said “well, can I see it?”, I knew the stigmas might actually be changing thanks to open minded people like him. This opened the lines of communication and we talked regularly about tattoos in the Corporate World but he felt that the individuals in senior leadership still frowned upon them. He cautioned me to keep mine in areas that would not be seen, aka do not get your arms tattooed. That thought stuck with me for years, I shied away from doing it and started using my upper legs as my canvas. 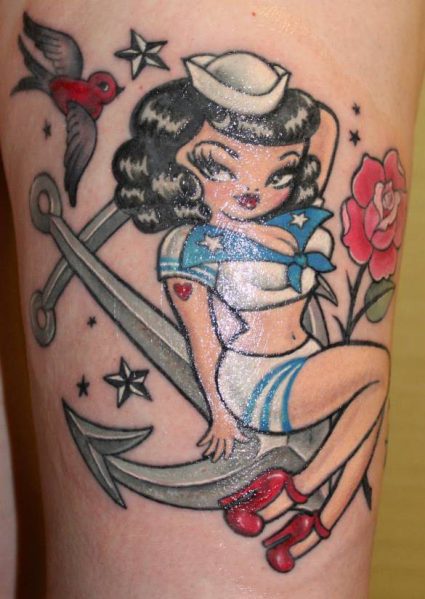 By 2013, I had my full back tattooed along with the two front of my upper thighs. When I was out in public, I received endless compliments from strangers and what was often said was “I don’t usually like tattoos, but yours are so nicely done…they are beautiful!” When the little old ladies starting paying me compliments, it was in that moment that I knew the world was changing for the better. I was dressing pinup full time while at work and stopped shying away from covering up my back 100%, which undoubtedly opened the lines of discussion with my coworkers and management. Employees felt more at ease to not cover up and tattoos became the norm, not the exception.

Inspired by my love of vintage by Malibu Budd.

It was not until late 2014 that I finally decided it was time to break the old Corporate mentality…I got my right upper arm sleeve tattooed. I can say this, it was a decision that I struggled with for a very long time even knowing society had changed for the better…would this decision hinder my career advancement? In the end, I felt that what I had chosen had deep emotional meaning to me and it was a risk worth taking at this stage in my life. Still, I knew it could be covered with a cute cardigan when in mixed company. No matter how inclusive people are, I think the deeply ingrained years of tattoos being taboo never truly leave us. 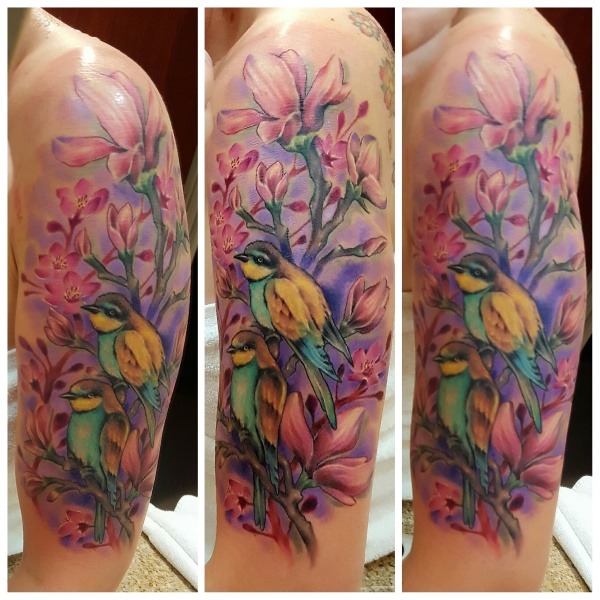 A tribute to my parents by Malibu Budd.

After that life changing decision, I truly believe the years that followed was when we began to see the Corporate World finally adapting with its employees. Eventually I got my left arm tattooed as well as continuing down my legs most recently. Everyone in my workplace doesn’t even blink an eye now that I leave them uncovered regularly and are pretty excited to see when I get new artwork. 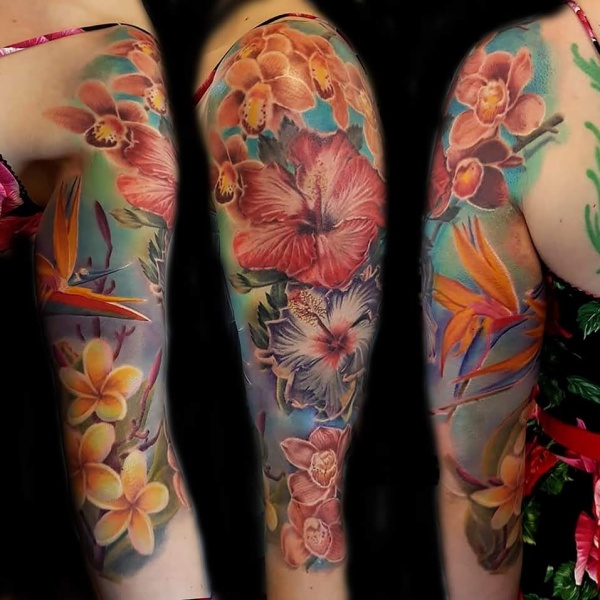 My love of Disney by Miss Mae LaRoux. 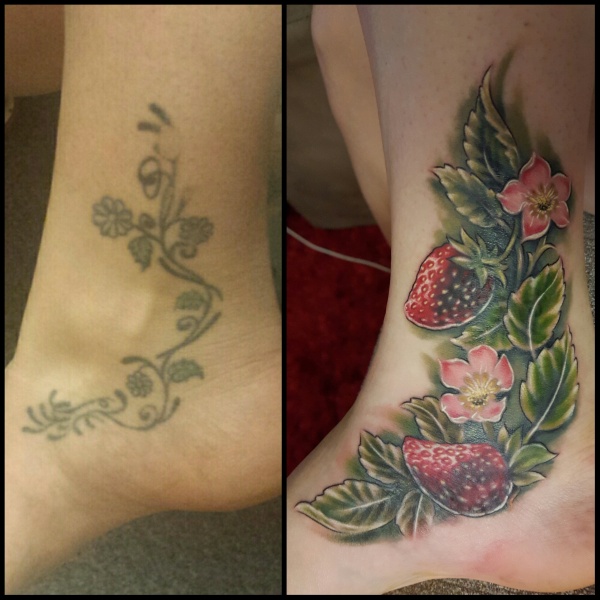 Cover up due to a terrible burn by Malibu Budd.

I know the stereotypes still exist and people are instinctively quick to judge when they see a vibrant redhead covered in tattoos wearing bright 1950s dresses, but what they do not know is that I am a manager that has over 15+ years of hard work and dedication that has earned me that title. Never judge a book by its cover, we define ourselves by our accomplishments and perseverance. 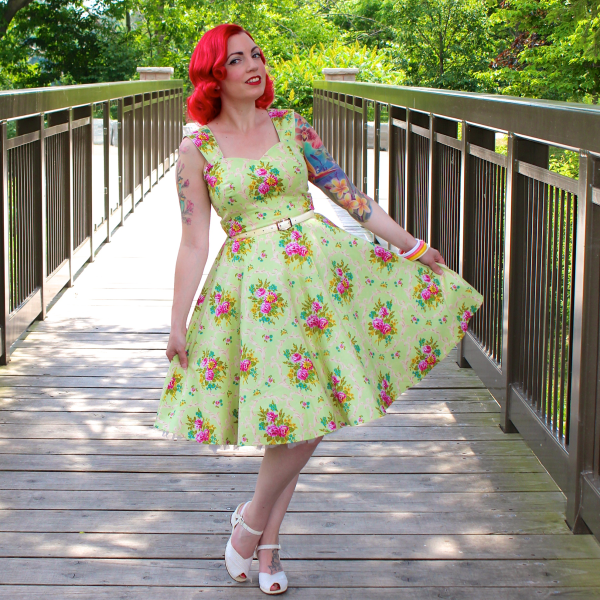 This is the everyday me! No more living two lives.

8 thoughts on “Tattoos in the Corporate World”